South-West France, Travel, What to see and do 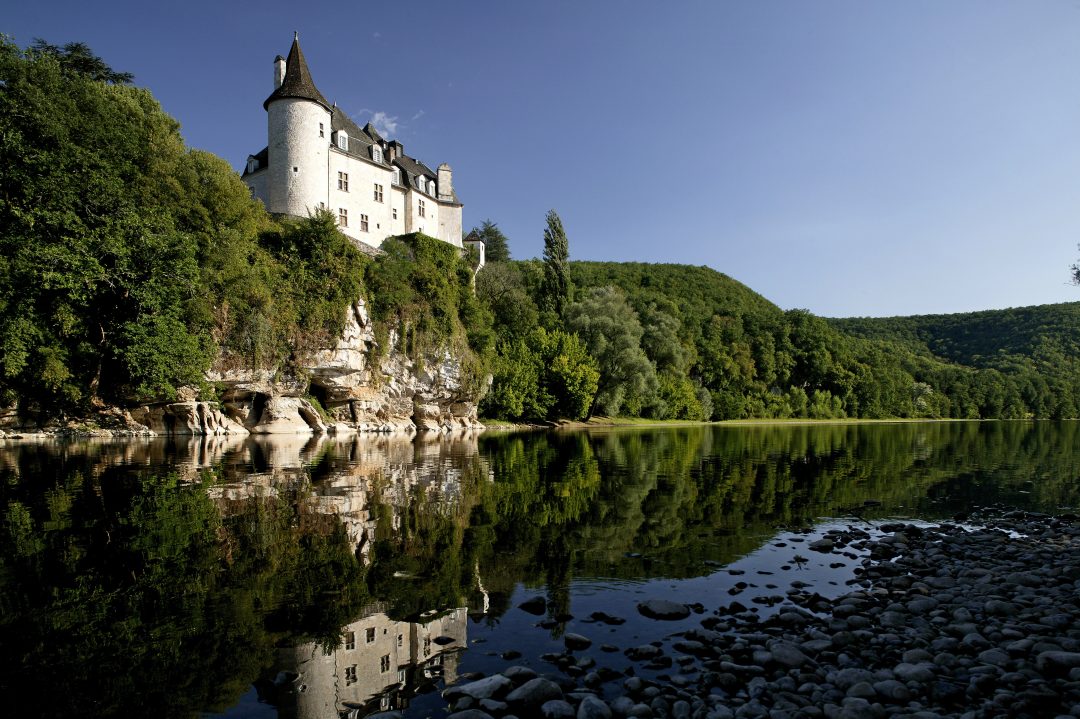 Under the shadow of a church bell tower, Souillac’s Friday morning market is in full swing. The morning light glances through the gaps between the medieval streets and locals banter with vendors, shaking hands and exchanging cheery bonjours across the stalls. Among the typical Périgord fare of pink garlic, Agen prunes and gnarled saucissons, plastic crates and wicker baskets are piled high with freshly harvested walnuts and tiny bottles of walnut oil stand next to enticing, caramel-coloured gateaux aux noix. A stall selling small iron dishes and hammers catches my eye. “Qu’est-ce c’est?” I ask the ruddy-cheeked seller. “It’s for breaking the nuts,” he says with a smile, placing a walnut in the centre and whacking it with the wooden mallet. The nutshell cracks, leaving the kernel perfectly intact.

I’m in the heart of walnut country, where the humble noix has been part of the landscape since the 10th century, when peasants would pay their debts with bushels of nuts. Just next door to the Dordogne, the Lot department boasts the same golden stone villages and breathtaking views, only without so many tourists. Indeed, when my sister and I go on a quick girls’ weekend in October to catch the last of the summer sun, there seem to be no tourists at all.

While temperatures fall away at home, here in the Dordogne valley, the mercury is still in the 20s. It’s perfect timing, then, to rent a stylish open-top Morgan — with walnut dash and endearing nickname “Ivy” — in which to follow the sinuous river from Bergerac to the Lot department. Here, walnut groves nestle under golden cliffs and the distilleries, mills and markets that form the Route de Noix (walnut route) wait to be explored.

Our hotel is the stylish Le Pont De L’ouysse, tucked beneath the turreted Château de Belcastel, which is perched precariously on the cliff above. The hotel’s restaurant terrace sits under the golden leaves of sweet chestnut trees, and it’s here that we sample a glass of the delectable local walnut wine, a heady concoction of red wine and walnut-macerated eau de vie — the perfect introduction to the theme of our stay.

Next morning we are up early, the promise of driving Ivy luring us out of bed. Bound for Souillac, we climb the winding road out of the valley, past golden cliffs and neat farmers’ fields. Ivy’s long, slender bonnet and plush leather seats turn heads as we go. Fellow motorists seem envious — surprised, even — to see two blondes in the front. They grin and stare, while fellow classic car drivers hoot and wave.

We cross a narrow bridge, stopping momentarily to admire the Château de la Treyne, its white-turreted façade sitting proud over the River Dordogne and making it the stuff of which fairytales and honeymoons are made.

Souillac is buzzing, and after a foray among the market stalls and a coffee in the sun, we make our way to Distillerie Louis Roque, a small producer of a number of aperitifs and liqueurs, many of which use walnuts as their key ingredient. The appropriately named manager, Philippe Denoix, shows us around the small, fascinating horse-drawn distillery — a cart with stills on top — which dates back to the 19th century, when it was used to tour the various orchards and groves, distilling fruit and nuts along the way.

A heady aroma pervades a dark cellar in which dozens of neatly arranged barrels contain a variety of drinks. The most famous is la vieille prune, a plum liqueur that is much tastier than its name — the old prune — may suggest. “It’s a favourite of some top chefs,” Denoix tells me.

We visit the on-site museum, where antique copper stills and assorted ancient tools tell the story of these historic drinks. A tasting is in order and, as his colleague sits at a table labelling bottles by hand (this is still very much a traditional operation), Denoix pours samples of the rich vieille prune and the distillery’s walnut liqueur, la vieille noix, into two tiny plastic beakers. The walnut liqueur, with its caramel and liquorice flavours, is like nothing I’ve experienced before, while the vieille prune is different again — a rich, aromatic brandy with deep fruit and and spices. Perfect for Christmas.

The tasting has stirred our appetite for lunch and, thankfully, it is only a short drive to Martel, where our reservation at the Moulin à huile de noix awaits. There has been a walnut mill on this spot for hundreds of years and these days it is the pride of the Castagné family. While their eldest of three sons farms the walnut groves, their middle son sells their walnut wine at his bar, Le Petit Moulin, in Martel. “What about your third son?” I ask the diminutive Madame Castagné, who proudly runs the auberge restaurant. “Oh he’s an artist in Bordeaux,” she says, rolling her eyes.

In the dark cellar, a huge stone crushes walnuts by the sackful as it trundles around its granite base. The enthusiastic Monsieur Castagné is its operator, like his father and grandfather before him. As we watch the ancient operation, he pulls us closer to the small trickle of oil that results. ‘Try that,” he says, sticking a finger into the flow, gesturing us to do the same. “Délicieux, n’est-ce pas?” Indeed it is.

Upstairs in the restaurant, Madame uses the oil in her dishes, which bring together all the best local produce. We sit at the simple oak tables laid with elegant white porcelain and delicate glassware, and Madame hurries back to the kitchen, returning with two tumblers of walnut wine and a tiny dish of walnuts. As we sip, she is full of friendly questions: “Where have you been today? What have you been up to? Do you want to see the menu?”

She talks us through her dishes. “What do you fancy? Lamb maybe? Foie gras salad?” It all sounds delicious, and we plump for foie gras, Quercy lamb and Rocamadour cheese. After an hour and a half, we’re the last to leave the restaurant.

From there, it is just a short pootle into the medieval centre of Martel, its jumble of terracotta roofs and narrow streets huddled around the central marketplace. We potter around, looking in delis, gift shops, the church and museum, before heading into La Boutique à Pain, on Avenue du Général de Gaulle, to try their walnut tarts and loaf cakes. We hardly have room, but we manage.

Our trip back to the hotel gives us a chance to enjoy Ivy’s open top. With the warm breeze in our hair, we follow the winding route, dipping down through walnut groves and truffle orchards and on to the Quercy regional park and its empty villages. With the tourist hordes long gone, we can slow down, speed up and snap pictures whenever we want as we motor through Alvignac and Carennac. We stop for a while in the latter and explore the small medieval cloisters attached to the 11th-century church. We have the place to ourselves as we wander through the elegant arches — not even the monks who worshipped here would have been so alone.

Back in the Morgan, we find the bridge out of the village is the perfect backdrop for pictures and, with no other traffic to urge us along, we take photos of the red railings, russet Virginia creepers, and medieval turrets and towers that frame it.

As the sun sinks and the shadows grow ever longer, we arrive at the pilgrimage site of Rocamadour. The village clings to a cliff above the River Alzou and today the sight is softened by the early evening haze. We watch a hot-air balloon that is poised for take-off in the valley below. As we stand next to the car, staring out over the valley, a middle-aged man in a clapped-out Renault screeches to a halt. Coming to the aid of two possible damsels in distress? Keen to chat up the two visiting blondes? No chance. This Frenchman has eyes for only one lady – Ivy, her pale complexion, sleek lines and, of course, her walnut dash.

Need to know
Carolyn Boyd was a guest of the Midi-Pyrénées tourist board (tourism-midi-pyrenees.co.uk)

Getting there
The walnut route is in the department of Lot, next door to Dordogne. To get there, fly with Ryanair (ryanair.com) or Flybe (Flybe.com) to Bergerac. From there it is a pleasant two-hour drive to Lacave. Cross Channel Sports Cars (00 33 5 63 94 58 31, ccsportscars.co.uk) sells classic cars (including Morgan, 2CV, MGB, Nash Metropolitan, Lotus and Mustang).

Where to eat
The auberge restaurant at Moulin à huile de noix (00 33 5 65 37 40 69, moulin-martel.com) just outside Martel has menus from €21, with visits to the walnut mill, shop and tastings. It’s open between April and November. Le Petit Moulin bar à vins (00 33 6 59 59 27 66, lepetitmoulinmartel.com) in the centre of Martel has main dishes from €14 and is open every day until the end of October. One of the best tables in town is on the terrace of Château de la Treyne, where diners can bask in the sun as the River Dordogne glides gently by. Set menus cost from €48 for lunch or €96 for dinner. In Alvignac on the edge of the Causses du Quercy regional natural park, try Chez Ernestine (00 33 5 65 10 89 12), a charming little bistro offering hearty, regional cuisine. Set menus cost from €15. A newcomer on the local restaurant circuit (it opened in June) is Le Virage (00 33 5 65 37 47 53), run by young twin brothers and getting rave reviews. Set menus cost from €17.50.

Where to visit
Distillerie Louis Roque (00 33 5 65 32 78 16, lavieilleprune.com) has free visits and tastings and is open weekdays 9am-noon, 2pm-6pm. Villages worth putting on your itinerary are Martel, Carennac (for its beautiful cloisters) and the Unesco World Heritage site of Rocamadour. Also near by is the amazing Padirac cave (gouffre-de-padirac.com), open until November 11. Adult entry is €10.50.

More information
Maps of the various walnut routes in Lot, Correze and Dordogne can be found at noixduperigord.com; tourisme-lot.com

I’m an experienced publishing professional with a sense of adventure. I’m a journalist, editor, travel writer and in the know on communications as a whole, from PR to internal communications. Want to chat about hiring me? Contact me here.